2017 Talladega Win
It was a great day for Aric Almirola and the No. 98 Fresh From Florida Ford team at Biagi DenBeste Racing.
Become a Partner
Find out more on how you can become a partner with custom tailored event packages
Become part of the team
Almirola wins by a nose at Daytona
1: Aric Almirola, No. 98 Fresh From Florida Ford
Photo Gallery
Latest News
Keep up to date with all the latest news, photos and videos
Read more
Social Media
View our Facebook and Twitter feeds and follow along throughout the race season
Stay connected

Homestead, FL (November 18, 2017) - A week ago in Phoenix, Casey Mears and Biagi-DenBeste Racing were fast all weekend and turned in a solid result, scoring an 11th place finish in the Ticket Galaxy 200. When they arrived in Miami for the NASCAR Xfinity Series season finale, the group aimed to duplicate their effort by putting Mears and his No. 98 GEICO Military Ford Mustang at the front of the field. Their aim was true and they would find themselves near the top of the board during most of Sunday's 300-mile event.

MOORESVILLE, N.C. (September 20, 2017) - After securing his second victory for the Biagi DenBeste Racing team at Talladega Superspeedway, co-owners Bill and Lori DenBeste asked driver Aric Almirola what his favorite color was. After answering that it was is red, Almirola didn't think anything of it. Little did he know that he would receive a classic Shelby to celebrate his wins. The DenBestes gifted Almirola a 1965 Shelby 427 Cobra CSX 6086, black with a red stripe.

Darrell “Bubba” Wallace Jr. came out strong in his first race with the No. 98 Biagi DenBeste Racing team. After qualifying the Nickelodeon Slime Ford 16th, Wallace consistently kept the car in the Top 15 during Stage One. He was 14th as a caution brought out the end of Stage One, and Wallace looked for some changes to help with overall lack of grip and tight handling. Crew Chief Jon Hanson called for four tires, fuel, air pressure and wedge adjustments for the team’s first pit stop.

Wallace Ready to Get Slimed at Chicagoland Speedway

No. 98 Nickelodeon Slime Team Looks to get to Victory Lane

Darrell "Bubba" Wallace Jr. is ready to get back on track at Chicagoland Speedway this weekend for his first race with the No. 98 Biagi DenBeste Racing team. An ambassador for Nickelodeon, Wallace will drive the Nickelodeon Slime Ford donning iconic Nickelodeon characters from SpongeBob to the Teenage Mutant Ninja Turtles.

Wallace to Drive the No. 98 Nickelodeon Slime Ford in the NASCAR XFINITY Race 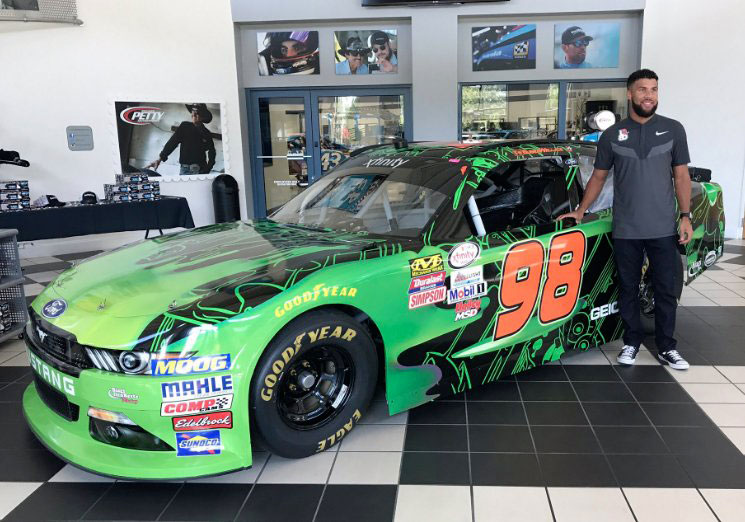 Aric Almirola wins by a nose at Daytona

July 01, 2016 – It was a great night for Aric Almirola and the No. 98 Fresh From Florida Ford team at Biagi DenBeste Racing. After a nail-biting finish that had Almirola ahead of Justin Allgaier by just inches at the time of the caution to end the race, Almirola walked with his car to Victory Lane after running out of fuel during his burnout. This is the second win for Biagi DenBeste Racing and the first win for Jon Hanson as a Crew Chief. 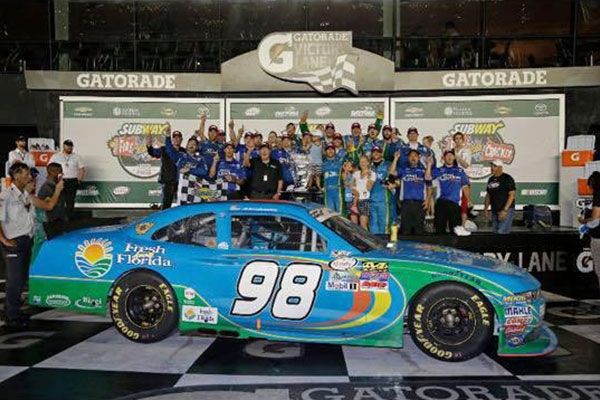 Biagi DenBeste Racing is co-owned by Northern California business partners Fred Biagi and Bill and Lori DenBeste who are involved team ownership and industry leaders in their field and operate at the highest standards of business ethics and integrity.

With an abbreviated race season we have several partnership packages available which can be custom tailored to meet every budget and marketing need. The possibilities are endless.

To find out more on how to become a partner please contact Cindy Shepherd through email at .

Behind the Visor: Darrell Wallace Jr.’s season of change and growth 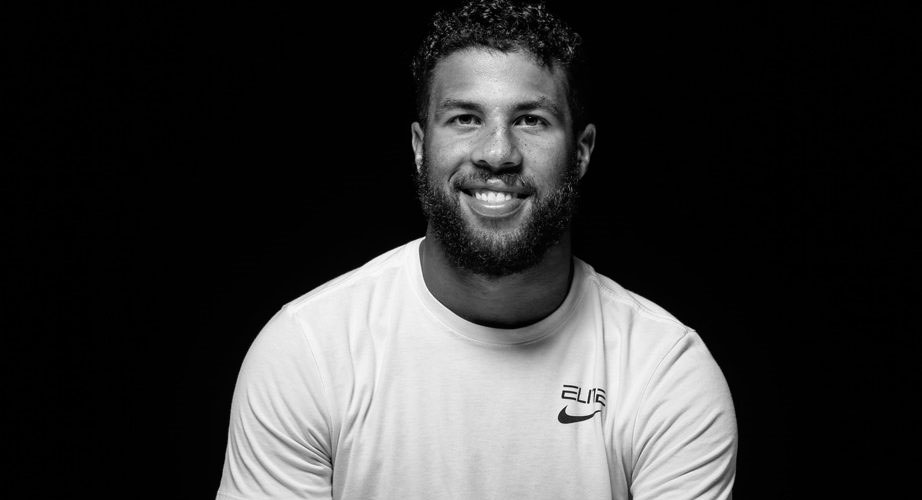 All I’ve done for the last 15 years is race — and when that gets pulled out from under you, it’s scary as hell.

This is your link to the NASCAR Xfinity Series Schedule!